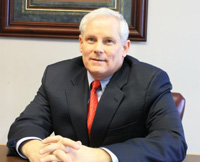 Prior to Founding the Firm

Before cofounding the firm, Attorney Jowdy attended Boston College where he graduated in 1975. Following the completion of undergraduate coursework, he completed his Juris Doctorate from New England School of Law in 1979. He was immediately admitted in Connecticut and the U.S. District Court of Connecticut.

After completing his education, Attorney Jowdy was appointed by the State of Connecticut Judicial Department as an Attorney Trial Referee and Attorney Fact Finder. For more than a decade, he served in this capacity in the Judicial District of Danbury.

Attorney Jowdy is a native and resident of Danbury. He is an avid sports fan and enjoys watching college basketball and professional baseball. In his free time, he likes to play golf. He is also a high school basketball referee.