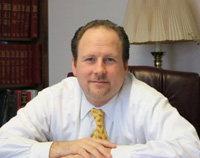 Mr. Jowdy earned his undergraduate degree from Wake Forest University in 1990 and received his Juris Doctorate from Pace University School of Law in 1994.

He is admitted in Connecticut, as well as the U.S. District Court of Connecticut. He is also admitted in the State courts of New York and the U.S. District Court for the Southern District of New York. With an emphasis on criminal defense, Mr. Jowdy has defended clients in both Connecticut and New York against a variety of felony and misdemeanor charges, some of which include DUI, drug possession, sexual offenses, domestic violence, assault, and more.

Learn From Those He's Represented

5 / 5 stars
Jeffrey Jowdy, of Jowdy & Jowdy Law Firm, served as my lawyer when I was a teen and got into some serious trouble. Mr. Jowdy worked long and hard on my case. My family and I are sure no other lawyer could have done as fine a job. The outcome of my case was the best it could have possibly been. Mr. Jowdy was available to speak to my parents and me answering our many questions and concerns. I am a man now and when I think of Jeff Jowdy after knowing him not just as a lawyer but as a caring human being, I would tell anyone this is a family run firm. It is apparent when you see the family all working together that family is important to them. They understand family and do the best they can for their clients. Jeffrey Jowdy is the man to call if you ever get in trouble with the law and need help. My family and I would not have gotten through that time in our lives without Jeffrey Jowdy. I regard him not as just a lawyer but as a friend.
- I. S.

Mr. Jowdy is a native of Danbury. Like James and John, Jeff is an avid sports fan. He loves the New York Yankees, watching college basketball, and playing softball, basketball, and golf.